As the second season for the Garden City High School Lady Buffaloes wrestling team progressed, head coach Carlos Prieto was convinced that his squad was improving week by week, listening carefully and taking to the fundamentals of the sport to get better.

That confidence was never on more display than Friday at Wichita Heights as Prieto watched his team place third overall in the Class 5-6A sub-state tournament with 122 points, placing behind winner Wichita North’s 149 points and runner-up Dodge City’s 135. There were 23 teams in the tournament.

With that team success came seven girls who placed among the top four and qualified to compete next Thursday, Feb. 25, in the combined 5-6A state tournament at Hartman Arena in Park City, just north of Wichita.

“Very proud of the girls,” Prieto said in a message Friday night. “They wrestled with a lot of heart and it showed.”

Leading the way was senior Anjelina Serrano, who captured the gold medal in the 132-pound division by pinning both of her opponents after drawing a first-round bye. She first pinned Great Bend’s Lexi Deines (25-9) at 1:30 of the first period and then in the title bout, pinned Alexandra LaForge of Wichita South (17-3) with just 47 seconds elapsed in the first period. Serrano, fifth-place a year ago when all classes combined in the first KSHSAA state tourney, will take a 16-3 to the state meet. 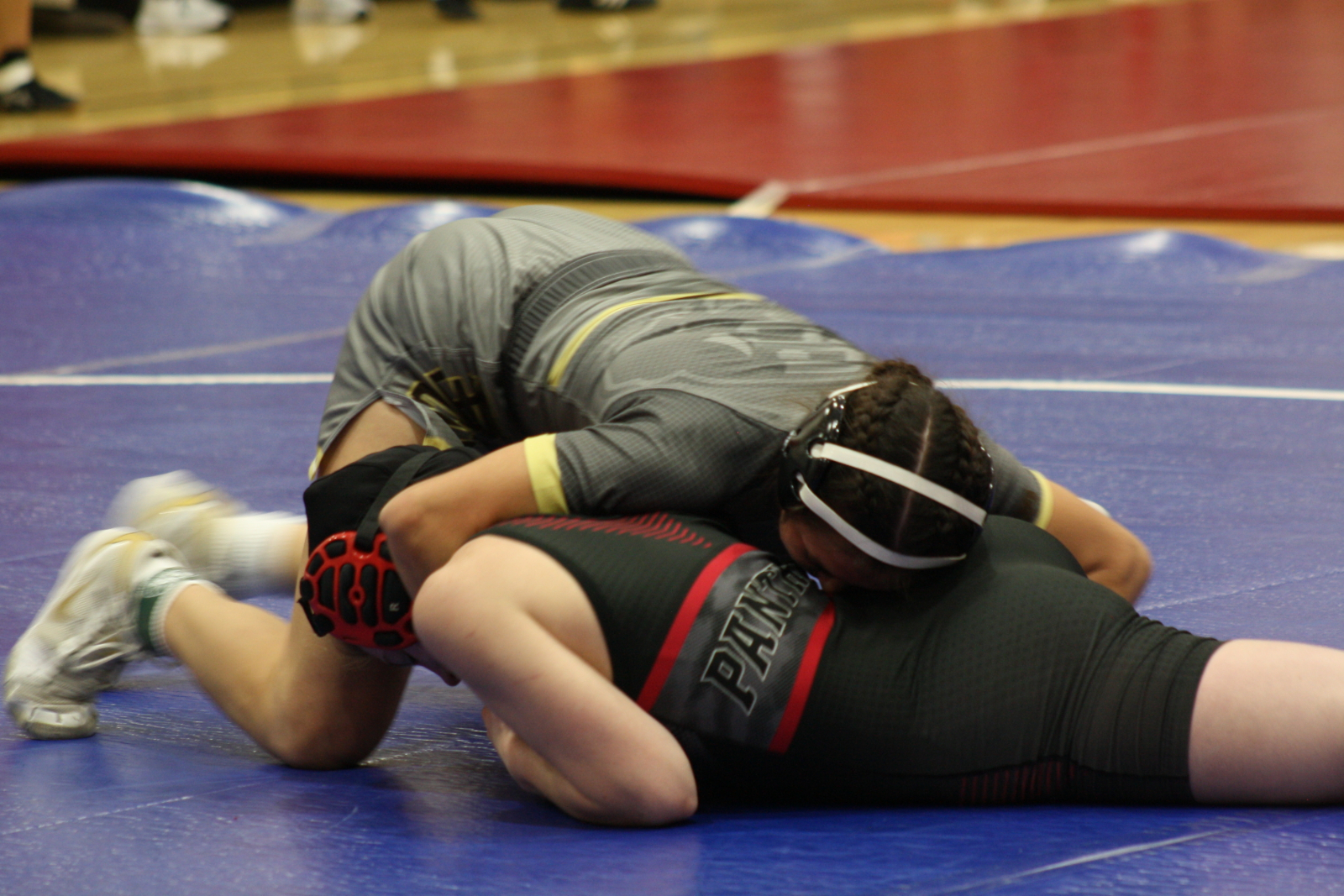 Belle Hernandez (126/15-6) and Lily Moore (191/6-9) took seconds in their respective weight divisions. Hernandez with a 13-2 major decision over Jordan Burford of Andover Central and then a semifinal pin of Diana Colchado of Wichita North (25-9). In her title bout, she lost to undefeated Breanna Ridegway of Great Bend (33-0) via a pin at 1:12 of the first period.

Moore (6-9) continued to be a pleasant surprise late in the season, winning her semifinal match by a 3-2 decision over Ashley Martinez of Dodge City (6-4). She had received a first-round bye. In the championship match, she was pinned by Wichita North’s Meya Howell (24-3) at 3:29 of the second period.

Sullivan lost her first-round match in a high-scoring decision, 13-16, to Amara Ehsa of Derby. But she rallied in the consolation bracket to decision Mana Chanthasone of Liberal, 13-6. That put her into the consolation final for third and fourth place where she gained a measure of revenge by pinning Ehsa in just 25 seconds of the first period.

Cruz lost in her opening match before getting a bye in the consolation bracket to reach the semis on that side. She then got a forfeit from Cheyenne Blackwood of Valley Center, winning a 5-1 decision over Sierra Ferguson of Great Bend before taking an 11-3 major decision over Brooke Swargo of Junction City in the third-place match.

Guzman (15-5)  posted a 3-1 record en route to her third-place finish. All three of her wins, including a pin of Jaymie Murry of Newton at 2:49 of the second period, came via pins. She was pinned in the semifinals by Ashley Arroyo of Dodge City (23-1).

The final qualifier was Angel Serrano at 143 pounds. She opened with a pin of Maley Hansen of Wichita North at 3:56 of the second period before getting pinned by No. 1-seeded Ashlynn Goodwin of Goddard (21-1) at 3:47 of the second. In her consolation semifinal, Serrano (13-12) pinned Halle Lohmeyer of Hays at 1:46 in the first and then lost a tough 3-1 decision to Delilah Sherbin of Wichita South in the third-place match.

“We cleaned up a few things and it showed,” Prieto said of the team’s effort the week before at the regional qualifier. “It comes down to doing the little things if the girls want to medal. Overall, the girls continue to be a joy to work with and they are leaving their mark on this program only two years old.”

The state tournament will be on Thursday, Feb. 25, with first-round matches starting at Noon. There are 8 qualifiers in each weight class, 4 from the western portion of Kansas and 4 from the eastern section.

No Events This Week

Events are added by athletic staff.
View All Events