In a season where nothing looks the same, or even remotely appears normal, the format for postseason wrestling in Kansas fits in nicely.

Rather than having the normal two, super regional sites – one for the 18 schools in the West division of the state and one for the18 schools in the East, this year thanks to COVID-19 guidelines, the Kansas State High School Activities Association altered its postseason process to determine state qualifiers.

Friday was the first step of a two-stage process for Garden City High School wrestlers to make the journey to the Class 6A state meet on Feb. 27 at Hartman Arena in Park City, just north of Wichita.

At the 6A Regional 1 site in Dodge City, the Buffs, who entered the meet ranked No. 6 in 6A, had a solid day by qualifying 10 of the 13 wrestlers to move onto the 6A sub-state site on Feb. 20 at Wichita Heights. In the team race, it was the Buffs scoring 193.5 points to finish behind No. 2-ranked Dodge City’s 266.5 points.

Three of the Buffaloes – freshmen Julius Medina at 106 pounds and Sebastian Lopez at 285 pounds, and junior Erick Dominguez at 138 pounds – came away with first-place finishes. Four other Buffs had reached the championship match but came up short in their final bouts of the night at the Dodge City High School gymnasium.

That group included sophomores Dakota Smith at 120 pounds and Colin Kleysteuber at 152 pounds, along with seniors Steven Sellers at 145 pounds and Josh Janas at 160 pounds. Janas, though, did not wrestle his finals match, as coach Carlos Prieto elected to hold him out of that match to allow him more time to recover from an injury suffered a couple of weeks earlier.

“He looked good (winning two matches by pins) but we decided to skip the championship match to give him more time to get a bit stronger,” Prieto said of his No. 1-ranked 6A wrestler at 160 pounds. “Overall, I think the boys wrestled well, but we did make some mistakes and we can learn from those.”

Janas (19-4) had reached the finals with pins of Kevin Smith of Wichita South (1:11) and Mason Weathers of Hutchinson (0:38). That put him against Marcelino Otero of Dodge City, whom Janas had met twice earlier this season. He dominated Otero in an 11-0 major decision during the league dual match and then had a move early in the Rocky Welton finals that resulted in him getting pinned just 12 seconds into the match.

Medina was solid in his run to the gold medal at 106 pounds while also improving his season record to .500 at 11-11. He pinned Noah Wainscott of Campus at 1:50 of the first period in the semifinals and then pinned Dameon Duran of Liberal at 1:25 of the opening period in the title bout.

Dominguez continued to be a dominant force at 138 pounds in upping his season record to 16-2. In his semifinal match, Dominguez pinned Colin Mertes of Wichita South at 3:52 of the second period. In his championship match, he overwhelmed Edwin Estrada of Dodge City with an 11-0 major decision.

Lopez, who has been impressive in his inaugural high school season, went up against his area rival in Dodge City’s Angel Aguilera and earned a narrow 3-2 decision to improve his season record to 19-4. He is the No. 4-ranked 285-pounder in 6A and two of his losses have been to the No. 1-ranked 6A grappler in Damion Ilalio of Manhattan. 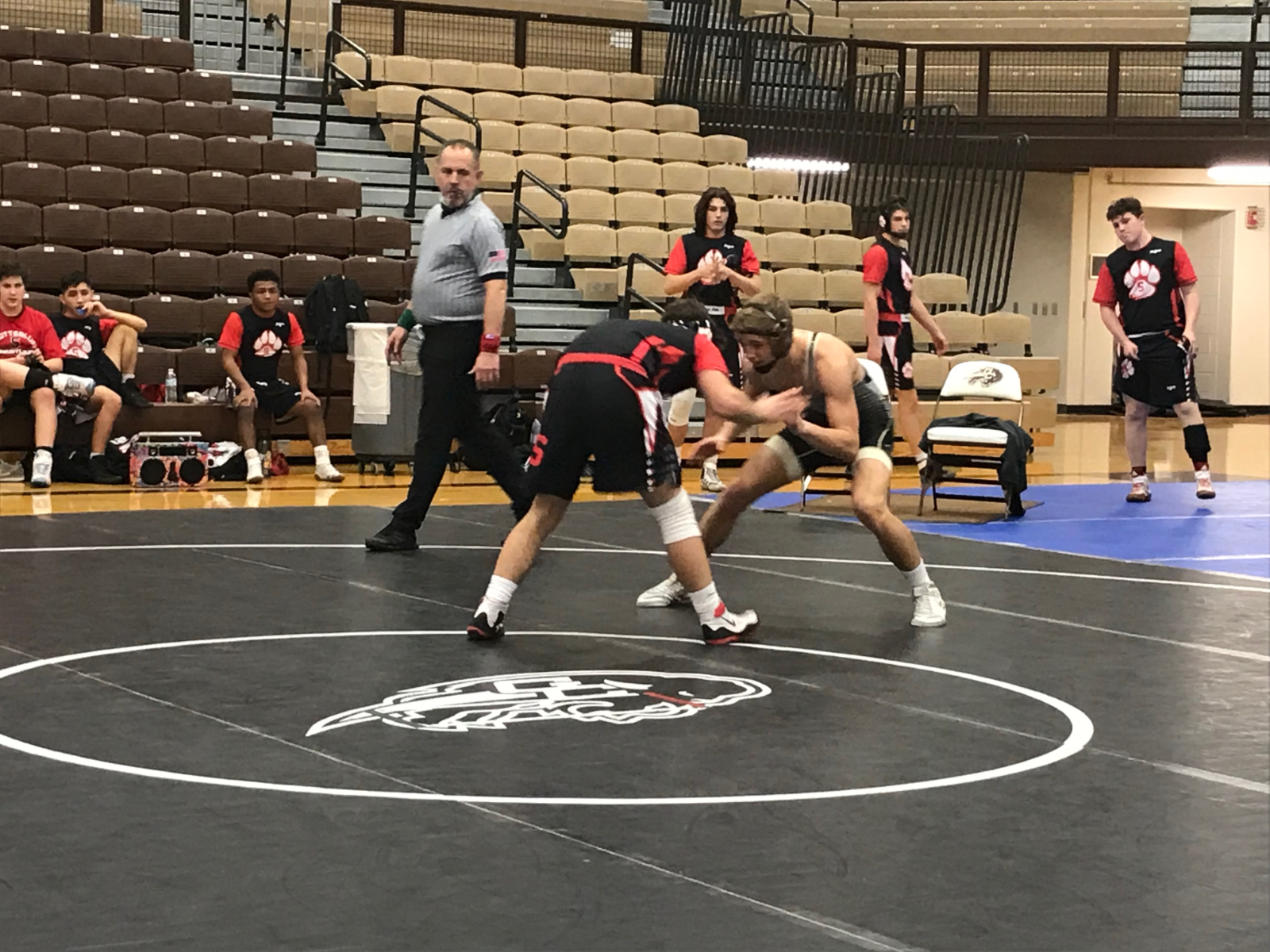 Sophomore Smith won two matches by technical fall and a decision before dropping the final match to Frio Vontress of Dodge City by fall at 1:59.

“I thought Dakota showed signs of his old self by making it to the finals,” Prieto said of his sophomore.

Heiman had dropped his opening match when he was pinned by Germany Washington of Wichita West, but bounced back to win his consolation semifinal by fall and then took third with a 7-3 decision over Ismael Ramirez of Dodge City.

“I’m really proud of Ryan for battling back after he suffered a loss in a match we were in total control of,” Prieto said. “He showed great grit in not letting that loss affect him psychologically by coming back and wrestling great.”

Sellers (16-6) made his way to the finals with a pin of Cody Meraz of Wichita North (3:23) and then a 5-4 decision over Rudy Hernandez of Dodge City. That sent him up against Campus’ Nathan Bowen, the No. 1-ranked 6A wrestler and fourth-place finisher a year ago at 152 pounds. He came up short in an 11-3 major decision setback.

Kleysteuber (12-9), too, had a buzz saw final opponent in Luke Barker of Dodge City. Barker won the 2020 state title and is ranked No. 1 again this season. Kleysteuber did score 7 points, but was tech falled in a 22-7 score at the 5:44 mark of the third period.

Thirds were taken by sophomore Joel Contreras (10-12) at 113 pounds when he earned a forfeit over Eric Spangler of Campus, who was disqualified from the match. Junior Alan Chairez placed fourth at 182 pounds, going 2-2. He won a quarterfinal match before losing in the semifinals and then came back to win his consolation semifinal before dropping a major decision in the third-place match to Owen Ward of Wichita Northwest.

The three Buffs who didn’t qualify for sub-state include junior Chris Brahmbhatt at 132 pounds, junior Ben Dunlap at 170 pounds and senior Isaiah Barrett at 220 pounds.

“I think as a coach you’re always disappointed when you leave wrestlers at home,” Prieto said. “You want all the wrestlers to move on, but unfortunately that’s sports for you.”

Prieto said he was overall pleased with the team’s effort to secure second place behind the Red Demons, who have been the top WAC school this season.

“Of the 10 moving on, seven were in the finals so that was another bright spot,” Prieto said.

Now the Buffs turn their attention to sub-state where the qualifying wrestlers from the Dodge City regional will join the four qualifying wrestlers from the Wichita Southeast Regional No. 2. There, top-ranked 6A Topeka-Washburn Rural won with 251.5 points while No. 4-ranked Derby took second with 198.5 points. The other schools represented there were Lawrence-Free State, Junction City, Manhattan, Wichita Southeast, Wichita East and Wichita Heights.

The top four finishers at the Feb. 20 Wichita Heights sub-state will move on to the State tourney on Feb. 27, which will be a one-day event this year, with 8-man brackets established in each weight class. The move is to limit the number of wrestlers, coaches, officials and fans at each tourney site.